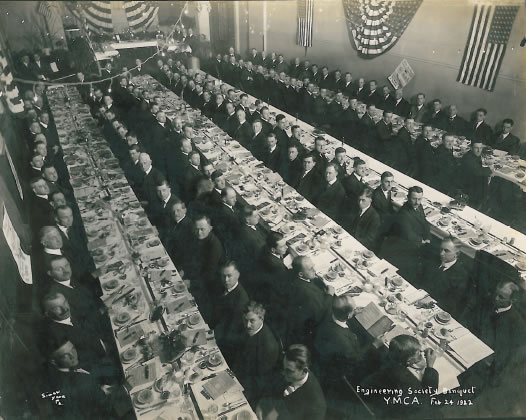 York County, since its founding, in 1741, has been the home of countless men and women with practical ideas and faith in the progress of our nation. Native sons recall with pride that their forebears were patriots, statesmen, inventors, farmers and craftsmen.

Succeeding generations, having passed on this rich heritage, particularly since the beginning of the twentieth century, give testimony that our South Central Pennsylvania area abounds with persons of superior talents, skills and an intellectual fervor that make for a dynamic America.

It followed as a natural consequence that, with a long and distinguished history of achievement, the engineering profession in this area should band together because of mutual interests. To the engineer, the challenge represented a further step in wider exploration of man’s boundless quest for knowledge.

That the York group’s objectives were immediately broadened is in evidence from their Constitution and By-Laws, ratified March 31, 1910, after an organization meeting, in the Manufacturers’ Association, six days earlier, March 25: “…to advance engineering knowledge and practice and to maintain a high standard of professional procedure in all respects…”

Having been joined in January of the founding year by others with a mutuality of interest… Jno. E. Graybill, Charles Exstrand, E. S. Hippey, Charles H. Ehrenfeld, W. B. Rawson and Edward Leber… the charter members had a nucleus for a substantial organization.

Although The Society’s beginning was hardly spectacular, and early years posed the usual financial difficulties and of recruiting members, there was an integrity of purpose that nurtured the young organization.  Thus, The Society has increased in stature over 50 years as one of the community’s outstanding institutions.

On August 29, 1910, The Society’s charter and incorporation papers were given court approval. The following October 22d marked its members’ first excursion to the former McCall’s Ferry Power Plant. On December 13, the first banquet was sponsored.

From this beginning, through the Fiftieth Anniversary Banquet, The Society’s social calendar precludes a possibility of its becoming an organization of professorial, stuffed shirts. There were oyster bakes, picnics, Halloween parties, St. Patrick’s Day socials (even for temporary Irishmen). A continuing series of annual banquets is traditional. Addresses may be made by governors of the Commonwealth; high ranking Army and Navy officers; scientists, senators, business leaders and nationally prominent engineers.

In the interest of providing improved facilities for its members, The Society occupied its first home on January 1, 1911. Headquarters that was to continue for twenty-nine years became established in rooms on the third floor of the Polack Building, 29 East Market Street.

Within The Society’s rooms have been literally hundreds of lectures of professional importance. Members and prominent national scientists alike provided a wealth of talent. The early days marked utilization of lantern slides as a visual aid. Later, there came movie films, silent, then sound; electronic devices and amplifiers; radio and television.

On some occasions, The Society’s meetings required the use of public auditoriums for popular lectures and demonstrations. One, in 1928, was an amazing discourse on atomic energy, a phenomenon whose practical application was to strike terror in the hearts of mankind, some seventeen years later. The speaker: Mr. Farquhar.

The Society’s archives; a technical library, founded in 1915; minutes of its meetings, attest that engineering progress virtually was flashing across five decades. Perhaps even only a cursory glance was accorded these milestones by the practicing engineer. With an innate sophistication for technological change, he was likely to have been preoccupied with tomorrow’s opportunity for serving his fellow man.

An observer engaged in a research of The Society’s half-century of progress is impressed not only with its attainment of a high degree of professional prestige, but also is made aware of its role of community leadership. Chronologically, there are three among many accomplishments that stand out:

During the (1916) administration of George Jessop, members of The Society discussed a memorial to Phineas Davis, engineer, inventor, builder. The inventor of the first successful coal burning locomotive, “The York”, had complimented his adopted city.

Patient work and planning by The Society brought success after eight years. The community was afforded an opportunity to honor Davis’ genius. Two memorials were placed in York, November 24, 1924. Those events, on Thanksgiving Day, are recorded among the outstanding public ceremonies in the city’s history.

Fred G. Dempwolf, a past president, designed the Davis monument, located along East College avenue, on Penn Common, and, significantly, opposite the entrance to William Penn Senior High School. Davis’ associate, during his 1809-33 residence in York, was Jonathan Jessop, an eminent citizen. The great-grandson, and namesake of Jessop, came from Pittsburgh to unveil the monument.

Principal address was made by John F. Sprenkel, The Society’s president.

The Gazette & Daily noted: “To The Engineering Society of York belongs the credit for having launched a plan whereby Phineas Davis memorials were placed in this city.. . ”

The York Dispatch and the Gazette both featured stories of York’s tribute to Davis by thousands who attended a large parade.  In it was “The Atlantic”, a model of Davis’ locomotive, chugging through central sections of York on tracks of the York Railways Company.

At a second ceremony on the same day, a tablet also was placed by the Vigilant Fire Company on the site of Davis’ early shop, King and Newberry streets.

This newspaper headline, Friday, June 16, 1939, spelled the realization of a dream of nearly 30 years.  The new home at 29 South Beaver Street, had been the Second Church of Christ Scientist, acquired from Dr. B. H. Pearce.

An impressive front elevation in faithful style of Greek architecture makes the “Engineers’ ” building a central city showplace.  A gleaming facade of white marble columns, accented by the sharp lines of the entrance arch, virtually seems symbolic of an engineer’s penchant for precision

Lighting equipment, heating and ventilation system are designed, as may be expected, to provide maximum comfort in the two-hundred-fifty seat auditorium.  On the second floor are a reading room, library and office.

In 1941, the late Edgar P. Kable, 1929 president, generously provided a $5,000 trust in favor of The Society as a nucleus of a building fund.  Members attending the 1956 banquet had the thrill of witnessing the mortgage burning.

When President W. S. Ehrenfeld announced the first regular meeting at the Beaver street location, September 18, members were given notice in “The York Engineer”.  The monthly, in abbreviated tabloid format, has been an important, regularly published periodical ever since.

When members attended the 1956 banquet, the drama of the mortgage burning was overshadowed by an even more dramatic announcement of establishment within The Society of a $100,000 scholarship trust and educational purposes fund by Mr. Kable

This quiet, mild-mannered and faithful member, through his generous benefaction, gave the organization opportunity for a new dimension in its objective to serve the community.  His death, in 1959, marked the passing of one of The Society’s “greats”.

Since establishment of the Kable Fund, over $1,000,000 has been loaned to York area students who required financial assistance to further an advanced technical education.  Student selection, and allocation of the trust benefits, have been the meticulous responsibility of a separate committee each year since the fund’s activation.  A portion of the Kable Fund for several years also was allocated for the purchase of technical books.  The Martin Memorial Library and other libraries were the recipients.

There has been an established practice by The Society of offering awards for achievement in the study of science to students at area high schools, York College, and at the York Campus of The Pennsylvania State University.  Awards also have been provided by The Society in recent years for leading entries in the York Area Science Fair.

In retrospect, the Society continues to offer cooperation to civic projects of wide benefit to the community, and to provide technical advancement and social fellowship for all area residents engaged in the general field of engineering.  Since membership is not limited to graduate engineers, but rather to those in the many branches of engineering, the lecture programs embrace a wide range of subject matter related to the profession.

About ESOY Board of Directors Our History Past Presidents

The Engineering Society of York